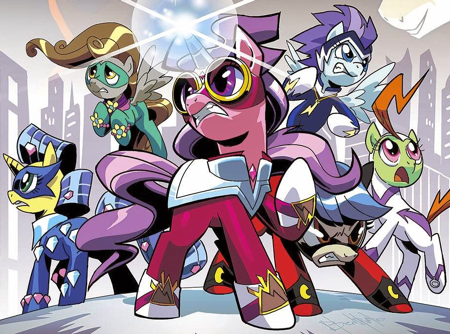 Well, most if not all of us have seen the episode Power Ponies, right? It's an unusual episode thematically. Some love it, yet some hate it. I myself was unimpressed by much of it. But that's not what this blog is about. This is about the mysterious comic book store from which Spike buys the enchanted comic. You'd think they'd take the word "enchanting" seriously in Equestria, but I won't judge. Anyways, the issue is that Spike looks away from the comic for a few seconds. It then ups and disappears, leaving no trace of-

Well, speak of the devil.

Now that's just... Holy haystacks, [Username]! You (or rather your OC) are a Power Pony!

So... here we are at the guildmaster's first blog game, if you can call it that. Now that your pony has been whisked into a world of heroes, villains, sidekicks, and butlers, what is he/she like? Some of us have already "super-powered" our OCs (I can name three), but what does that really mean?

And who are you, dear character of [Username]?

Are you a terrifyingly rich vigilante whose dark past and thirst for justice drive you to beat down criminals with your martial supremacy? Perhaps a friendly neighborhood web-slinger? A police commissioner? That epic butler?! The possibilities are just about endless.

For this blog, I invite you to post what you believe your OC's powers would be and also who he/she would be. Feel free to draw inspiration from comics themselves, whether they be Marvel, DC, or whatever third company invented Hellboy. And if you feel up to a challenge, go ahead and make some artwork. After all, the city of Maretropolis is still in the middle of a crime wave.

Ah, and I almost forgot. Welcome to the JLE.

Retrieved from "https://justice-league-of-equestria-roleplay.fandom.com/wiki/Justice_League_of_Equestria_RolePlay_Wiki?oldid=102345"
Community content is available under CC-BY-SA unless otherwise noted.